The science behind the question  What is EMF? (electromagnetic fields)

The small commission I receive when you order products on my site allows me to continue updating it.

Prices are the same as if ordered directly from my affiliates.

What is EMF in today's world? Many modern technologies utilize EMFs which are generated by electronic circuitry and broadcast into the air after information has been impressed on the wave. These technologies are all a form of wireless communication. There are many examples such as commercial radio, amateur radio, microwave transmission, satellite links, wi-fi , and Bluetooth to name a few.

Other technologies produce EMFs as a byproduct of their use. For example, all electric motors produce EMFs, and these may inadvertently be broadcast into the atmosphere around them.

So the question "what is EMF?" has a lot to do with modern technologies.  Man made EMF has increased in recent years to trillions of times the ambient level found in nature.

Since all biological creatures including humans utilize EMFs for signaling on a cellular and systemic level, it is reasonable to assume that man made EMFs would have some negative biological/health effect.

Therefore, in answer to the question "what is EMF?" we must add the definition:

EMF is a man-made environmental toxin that is found virtually everywhere and is increasing exponentially.

It is in your best interest to understand a little more of the science of EMFs. I encourage you to continue reading
"THE FINE PRINT"
below

WHAT IS EMF?
detailed discussion

In answering the question "what is EMF?" you may note there are numerous dictionary definitions. Most relate to one of the fundamental forces of nature: the electromagnetic force. The electromagnetic force plays a part in almost everything in our universe. Without it the universe (and us) would not exist. It is part of all chemical reactions. Even within our bodies electromagnetic force is the basis of many cellular activities. Calcium, sodium, and potassium as well as numerous other essential elements are moved into and out of cells based upon electromagnetic attraction. Our brain and nervous system rely on chemical as well as electromagnetic signaling to pass information along from neuron to neuron. It is really remarkable and very complex. The point is that EMF is actually a good thing. In part, our answer to "what is EMF?" must be that it is an important part of nature. Without EMF life would be impossible! However, in modern times particularly since the late nineteenth century, humans have learned to harness this force and have developed numerous technologies based on EMF. The result is that we are now living in a "sea" of man made electromagnetic radiation (EMR). This man made EMF and resulting EMRs are truly a pollution of our environment.

Just how much man made EMF is there?

The straight talk is that man made EMF it is now trillions of times stronger than the natural (ambient) EMF in nature. This of course depends on where measurements are taken. But it should be no surprise that whether we want it or not we are all being subjected to large amounts of electromagnetic radiation because of modern technologies. There is much debate about whether this is harmful to human health or not. For more information about whether EMF is harmful to your health go to my page Health Effects of EMF Exposure

Understanding the basic science of EMF is essential to knowing how to measure and mitigate it.

To adequately answer the question "what is EMF?" requires some knowledge of science. Even if you are not fond of scientific topics take a little time to understand the basics below. It will go a long way to help you understand what EMF is and how it can affect your health. It will also help you avoid being scammed by one of the many unscrupulous EMF schemes out there.

The electromagnetic force is responsible for positive and negative charges. Like charges attract each other whereas unlike charges repel each other. This force of attraction is termed voltage. At the atomic level an electron has a negative charge and therefore will be attracted toward anything with a positive charge. When a charge (for example a large number of electrons) move through a conductor - perhaps a wire - the result is current (flow). The amount of flow is measured in Amperes. If the current moves in one direction it is called Direct Current (D.C.) The moving electrons also produce a magnetic field around the wire. Thus the electric and magnetic fields are interdependent. Really they are both part of the same force - the electromagnetic force.

In direct current (D.C.) the magnetic field is static and constant so long as the amount of current remains the same. Much circuitry however utilizes Alternating Current (A.C.) In alternating current the voltage changes polarity negative to positive back to negative ... over and over at a regular rate of time called it's Period. Therefore the current also moves back and forth in the conductor. It doesn't matter that the electrons barely move anywhere, they still transfer energy down the conductor as they push and pull back and forth in the wire. The number of complete cycles per second (negative to positive back  to negative) is called the Frequency. Frequency is measured in Hertz which is simply the number of complete cycles per second  (cps).

Whew!! That's a lot of science in just three paragraphs!! But how does this relate to the question "what is EMF?"

Whenever current moves back and forth in a conductor (A.C.) it ALWAYS produces an electromagnetic field expanding, collapsing, and expanding again at the same frequency as the current in the wire. Some of the energy of this alternating field is launched into the space around the conductor and radiates away at nearly the speed of light. This is called electromagnetic radiation (EMR).

Radio waves are EMR of various frequencies launched into the atmosphere through an antenna after having information impressed upon them by a process called modulation. Modulation can be Amplitude Modulation (AM), Frequency Modulation (FM), Phase Modulation (PM) or some combination of these involving analog or digital techniques.

This is the underlying principle of all wireless technology.

Now Here are the Essential Points:

A Little Further on EMF Sources

Since electromagnetic fields (EMFs) radiate into the atmosphere around us, they can be utilized to transmit information. Such technologies are engineered to operate at specific frequencies. Often the frequency is assigned by a government regulating agency (the FCC in the U.S.) For example AM radio, commercially developed in the 1920s, operates in the frequency range (called the AM Band) of 540 kHz to 1600 kHz. The signals produced by these radio stations propagate very well through the atmosphere and even follow the curvature of the earth for a long distance. Thus, they are able to provide long range coverage of programs. At night it is possible to receive AM radio stations from 1,000 miles away or more! FM radio - developed in the 1940s - utilizes frequencies from 88.1 MHz to 108.1 MHz (the FM Band). In each case a transmitter produces a specific channel frequency called the "carrier" (often referred to as the station frequency). Then the program is impressed on the carrier by a process called "modulation". A radio receiver when tuned to the station frequency will amplify the signal stripping the information from the carrier (demodulating) and sending it to speakers or headphones.  These are just two of many technologies using electromagnetic radiation for communication purposes. Each uses its own frequency - usually licensed by government regulations. Each also broadcasts it's signal into the atmosphere at a given strength - from a fraction of a Watt to 100 kiloWatts.

Since the atmosphere is considered "public domain" it is regulated by governments for the benefit of its citizens. In the United States the regulatory agency is the Federal Communications Commission (FCC). The FCC establishes and enforces strict rules for all transmission of EMRs for commercial or private use with only a few exceptions. Regulation involves licensing of specific frequency bands to various entities - military, commercial companies, government agencies etc.  Keep in mind that all such technologies are harnessing the same natural force of nature - EMF. The only differences are the frequency, the way information is impressed onto the carrier, and the particular type of information being sent. Usually the information is analog (voice, music etc) or digital (long strings of 1s and 0s as used in computer technology).

Here are some common technologies which use EMR for communicating information:

Here are some common technologies which may inadvertently shed EMRs into the atmosphere:

There are hundreds of other technologies utilizing from below power line frequency to 100s of GHz. For a comprehensive listing see the FCC Table of Frequency Allocations at:

A nice color chart is also available at:

Other Important Characteristics of EMF

In answering "what is EMF?" it is important to consider how EMF behaves in our environment.  As an electromagnetic field passes through the atmosphere it spreads out and thus it's field strength diminishes. In effect the volume of space it fills is increasing as it spreads out moving away from it's source. Meters designed to measure EMF measure the signal strength. Signal strength may be expressed in V/m (Volts per meter - the difference in the field at two points 1 meter apart). Signal strength may also be expressed in W/m2  (Watts per square meter - the signal power falling upon a surface area).

The way a signal is affected by the atmosphere and objects in it's path depends upon it's frequency. Certain frequencies (visible light for example) pass readily through the atmosphere but are reflected or absorbed by objects. The signal may also be refracted (bent at an angle from it's original direction). Some frequencies (microwaves for example) will pass through dense objects such as walls, buildings etc.

Understanding the characteristics of reflection, refraction and absorption for a specific frequency will aid you in determining how to reduce or eliminate it (mitigate) from your local environment.

So How Does This Discussion of "What is EMF?" relate To Protecting Ourselves From EMF ?

To protect ourselves from harm we must understand what EMF is, how to measure for it, and how to mitigate its effects.

Understanding the basic science will help us to do so intelligently while avoiding useless (and often expensive) remedies promoted by those with little knowledge or by unscrupulous individuals!

EMF mitigation involves identifying sources of EMRs in the environment. The direction, frequency and strength of EMRs are measured using meters or other equipment. Then mitigation proceeds by eliminating sources of EMR or blocking it using specific materials and techniques.

WHAT'S NEW on the EMF FRONT? 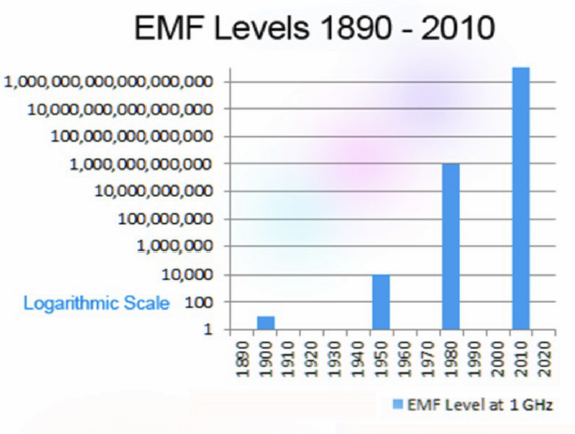 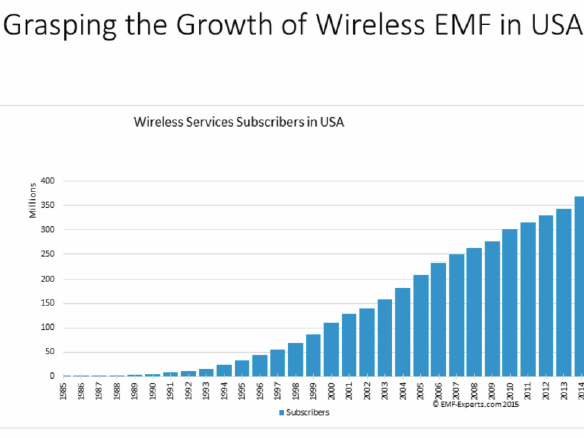 Our exposure to man made EMF has increased exponentially in recent decades. 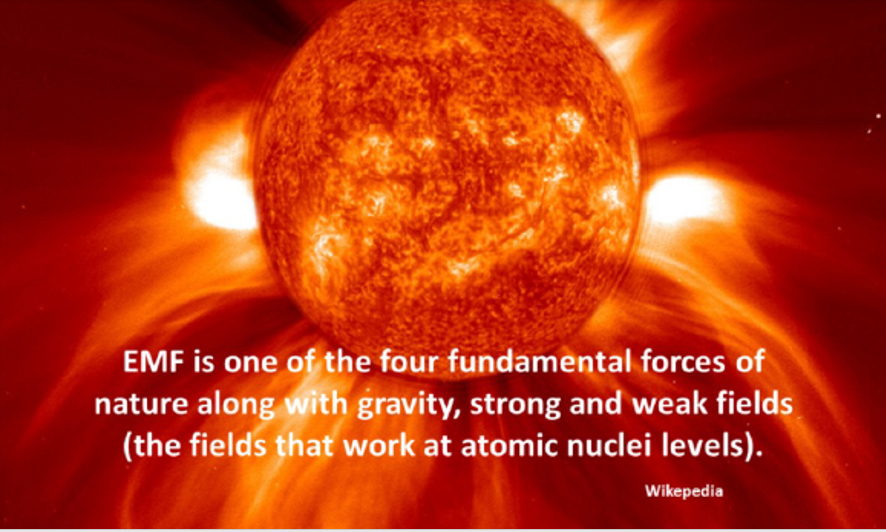 EMF is natural to our environment. Without it our universe would not exist. 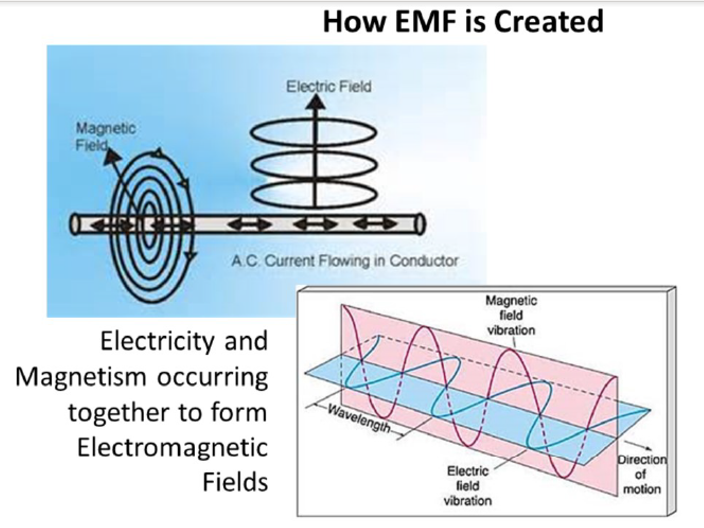 Whenever electric current moves through a conducting medium such as a wire it creates an electric and magnetic field  perpendicular to each other. If the field is dynamic such as in an alternating current (AC) some of the energy will launch into free space traveling away through the atmosphere.

One common source of electromagnetic radiation (EMR) is power lines including the electric power distribution into our homes and businesses.

Magnetic fields from power lines outside the home can often be measured within. Strong magnetic fields in homes have been associated with childhood leukemia, adult depression, and other chronic ailments. 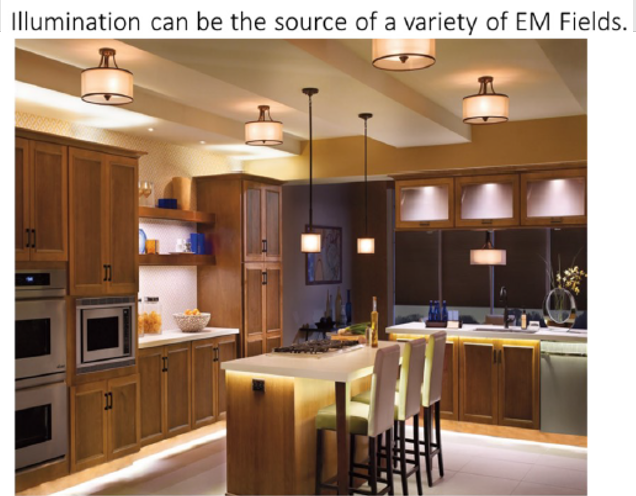 Most household lighting and appliances are strong sources of EMR. 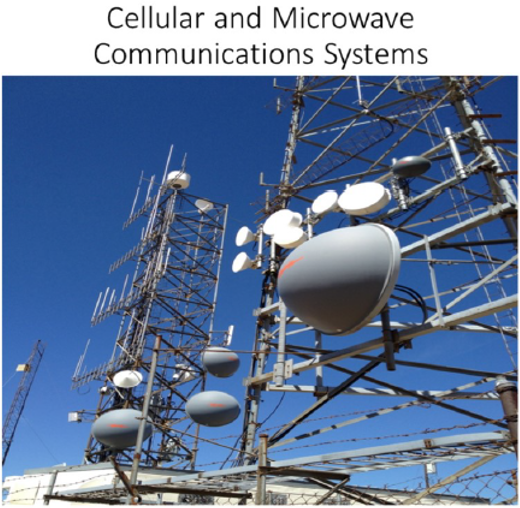 Modern cellular and other microwave communications have greatly increased our exposure to man made EMRs. 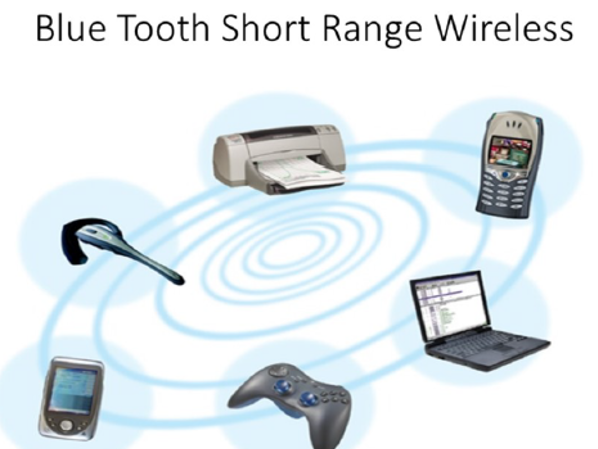 With the proliferation of wireless devices our exposure to EMR is increasing exponentially. 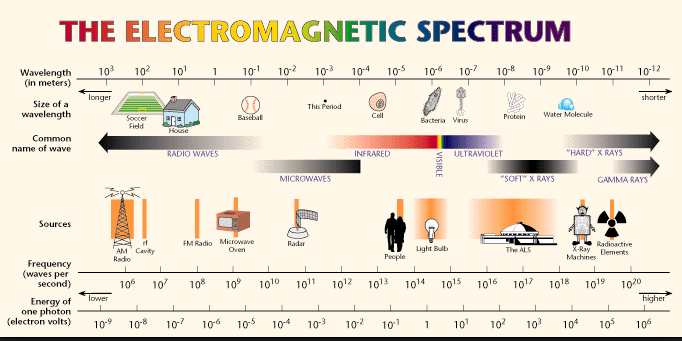 All EMF is the same force and travels at near light speed through the atmosphere.  The only differences are in the frequency and strength of the  field as it travels.